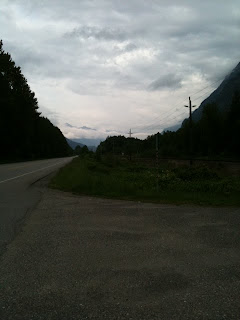 Sent from my iPhone
Posted by Alexander Holton at 1:15 AM No comments:

Today was an exhausting, but extremely satisfying ride. For much of
the day we found ourselves in lush flat farmland as we hugged the
Fraser river and the rail line through the Fraser Valley. It was an
odd experience to ride through such level land, but to be surrounded
on all sides with seemingly insurmountable mountains; some so high
that a significant amount of snow still rests on their peaks.

Periodically throughout the day, often with little warning, the road
would suddenly catch up to these climbs, quickly waking us from our
leisurely pace and jarring us into a challenging ascent.

Despite predictions of a warm sunny day, clouds and unseasonably cold
weather dominated most of the day broken with small pockets of
relative warmth. Vanessa and I both donned and removed our
windbreakers more times than we can count. Tomorrow by all reports,
at least weather wise, should be a much nicer day for our 70km climb
through the Allison Pass in Manning Provincial Park.

The above photo shows a view about 10 km out of Hope BC and was
typical of the day. Long rolling roads and tall beautiful peaks.

Posted by Alexander Holton at 1:08 AM 2 comments: 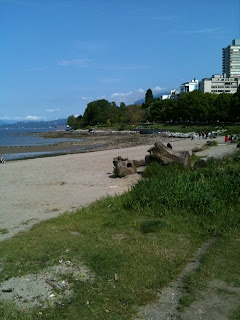 Posted by Vanessa Parlette at 12:40 AM No comments:

Hello from Sun Valley Campground. We had a great ride today, starting from our B&B in Vancouver we headed to Stanley Park for the symbolic launch at the Pacific Ocean. I had forgotten how wonderful it is to ride in Vancouver with fresh ocean air and bike lanes all around you. We were longing to spend an extra day in the city but we were too hyped about starting the ride so we started our trek east along Hastings, which eventually becomes highway seven.

We were feeling pretty smug about our quick adaptation to the heavy load we're now pulling on our bikes. On the flat and mild-moderate hills it doesn't make too much of a difference; we're a little bit slower but when you can build up a momentum it's almost possible to forget the packs are there. That is at least until you're 'mountain-struck', then there is no mistaking you have seventy extra pounds to heave up the steep grades. Burnaby mountain gave us quite the strenuous initiation into what lies ahead in the next few days. Luckily we got the worst of today's climbing out of the way within the first 20km before enjoying an invigorating descent and some relatively flat riding through Port Moody and Coquitlam. Between Maple Ridge and Mission some rolling hills pick up again as the vistas shift from power shopping centers to rivers, mountains, and railroads.

Following the Lougheed highway/highway 7 for the duration of the ride you'd expect it to have been miserable. I generally always find highway riding at least a little harrowing, and to be honest today there was some of that, but it helps that there was a wide paved shoulder for *most* of our route. Sometimes it dropped off or was covered in too much debris to safely cycle upon but drivers generally gave us our right to the road and passed us with room to spare. Actually, we get the sense that many of the drivers around here are also cyclists --in Toronto we get honked at for being on the road at all, whereas here we're honked at so that people can give us the thumbs up!

Amazing bike infrastructure generally attracts many cyclists and we've met a lot of great people today. We cycled briefly with a tourer from Belgium who has already been cycling for a month. He started in San Francisco and is now on his way east with no set destination. We have to admit we took some delight at us taking a faster pace than him ;-).  Now we're at camp bordered by touring cyclists on either side, all with stories to tell.

We're both feeling pretty good and happy to be on tour, though it hasn't quite sunk in that we'll be doing this for three months. For now, it looks like rain is coming and we need to pack up for the night.

We'll be in touch soon!
Vanessa and Alex

Note: we're writing posts through email on the iphone and it seems unable to accommodate text and photos at the same time so until we can fix it from a computer we'll be posting the two separately.

Posted by Vanessa Parlette at 12:37 AM 2 comments: 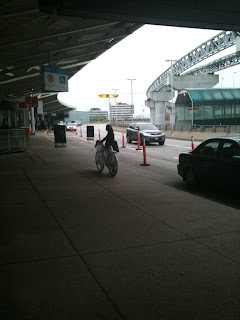 Photo - Vanessa at Toronto's Pearson Airport.
Vanessa and I wrote a lovely post, but now have unfortunately learned that we need to send email and photos to the blog separately or it deletes the text. So in short, we're here in Vancouver, happy, and looking forward to heading out tomorrow.

Wish us luck and more soon.
Alex and Vanessa

Posted by Alexander Holton at 12:46 AM No comments:

The Power of Spandex 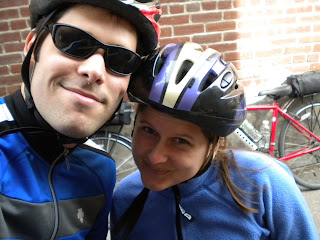 There is something magical about the power of neon spandex. No matter how tired you feel, once you don a yellow jersey and skin tight shorts you feel like you can take on the world. I've often pondered whether the advantage of proper cycling attire rests more in self confidence boosting than in wind resistance. People also take it as an invitation to conversation. I suppose they figure if you're outgoing enough to wear something as silly as padded shorts you have to be pretty easygoing.

We are now four days from our flight to Vancouver. Our living room is awash of camping equipment and Vanessa and I are frantically attempting to both ready ourselves for our trip, while also preparing to leave our apartment, city and personal commitments for three months. Vanessa and I have graciously taken turns over the last month both worrying and fantasizing about the journey before us. While one of us worries, the other inspires and vice versa. We've never been so excited and intimidated all at once. That being said, through this cold and rainy spring we've slogged through thunder, lightening and hail; dealt with achy knees and leaky rain gear and came out that much stronger for it. Neither of us can promise that we'll make it from one side to the other, but we do know that we'll set out on May 29th to meet meet new people, visit new places and experience long-distance travel by bicycle.

This is our first post in a while, but we hope to post regularly over the course of the trip. We have also confirmed that Rogers will graciously cover our communications costs, making it that much easier for us to post on an almost daily basis.

Wish us luck and see you all soon,

Alex and Vanessa
Posted by Alexander Holton at 7:53 PM 1 comment:

To Donate Go To:

Promote your Page too