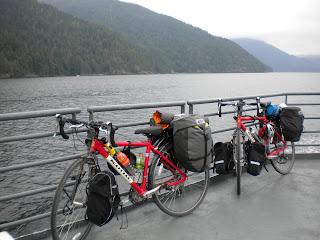 In the summer of 2009 Vanessa and I used our tax returns to pick up two red Kona Jakes and started to fall in love with bicycles. After taking a few rides from Toronto to Hamilton to prove to ourselves that distances like 80km could indeed be covered by bike, we tossed the Jakes on a plane and spent two weeks biking and camping around Vancouver Island. This trip was a real turning point in our lives for a variety of reasons. Most importantly, Vanessa and I had both started to feel like we were losing our connection to the outdoors, which is something both of us hold very close to our hearts.

Both of us grew up exploring forests and lakes in and around Northern Ontario and a lot of who we are has come from these experiences. The best parts of the early days of our relationship were spent outside, planning trips to Algonquin and nights sleeping under the stars. In 2006, Vanessa returned to Toronto from her masters degree at Simon Fraser and I wrapped up my undergraduate at Ryerson. We found ourselves for the first time in a long time free of commitments and started discussing where we wanted our lives to go from there. We tossed around ideas like moving north or to Vancouver. We wanted to find a way that we could blend our recreational and professional lives in the years to come. These plans hit a snag that summer after a series of doctors appointments that I had for a nagging shortness of breath.

I was cleared of asthma three years before this and figured that I was simply having a relapse. The doctor agreed this was most likely the case, but asked off handedly if I had noticed any swelling in my arms and legs. My first reaction was no, but then I remembered feeling that my right foot in my hiking boot was a bit tight. After a quick examination she scheduled a sonar scan of my heart and weekly checkups leading up to it.

Two weeks later, I had the scan and to my surprise was immediately admitted to the hospital with an 8cm dissection in my aorta. Forty-eight hours later, I had what I was told was life saving surgery to replace my aorta with a plastic shunt and to rebuild a badly damaged heart valve. The recovery ripped me to shreds, mentally and physically. For the next year I slowly built my way back up from exhausting myself by walking from my bed to the nurses station, back to something that resembled my life before the surgery. Putting the physical recovery aside, I also totally lost confidence in my ability to engage in physical activity after the surgery. Early on, I was told I had a ten pound weight limit and a max pulse rate of 130bpm. The idea of camping or being anywhere any distance from a hospital terrified me and camping pretty much fell off my radar and subsequently Vanessa's in the years after the surgery.

Our Vancouver Island trip changed our lives in a variety of ways. Biking inspired a method of travel that allowed us to discover places in a very wonderful, deliberate and sustainable way. For me personally, it also introduced us to a way to reconnect with nature that helped rebuild my confidence in my own physical independence. Biking was something I felt comfortable with and that fell within the boundaries of my physical limitations. A lot of the confidence I lost after the surgery I found again on a bicycle.

This year, Vanessa and I have found ourselves in a similar stage of life that we found ourselves before the surgery in 2006. Vanessa is in the final stages of a PHD and I'm wrapping up a two and a half year tenure as the Preparator at the Stephen Bulger Gallery. Both of us look at our bicycle trips as a real highlight in our lives and the idea of biking across Canada is something that has grown in us pretty much since the moment we pedaled our Konas home from the shop. When we started debating the idea of taking such a long period of time away from our professional lives, the positives were obvious: A great challenge, an adventure, a chance to reflect, raise money for a life-changing organization and an opportunity to visit old friends. Still, we really struggled with the idea of uprooting ourselves on a whim for such a long period of time. What finally convinced us to take the risk was thinking of our lives without taking the trip. When we thought about life in the years to come without at least attempting to cover the 8000km we felt deflated, like something positive and potentially life changing would be missed. We can't envision another opportunity in the foreseeable future when we would have similar breaks in our work lives, so we figure now is our chance to follow our hearts.

We plan to use our site and this blog as a record of our planning and once we get going, of the trip itself. The site and the trip will also act as a vehicle to support The Cardiac Health Foundation of Canada.

To Donate Go To:

Promote your Page too